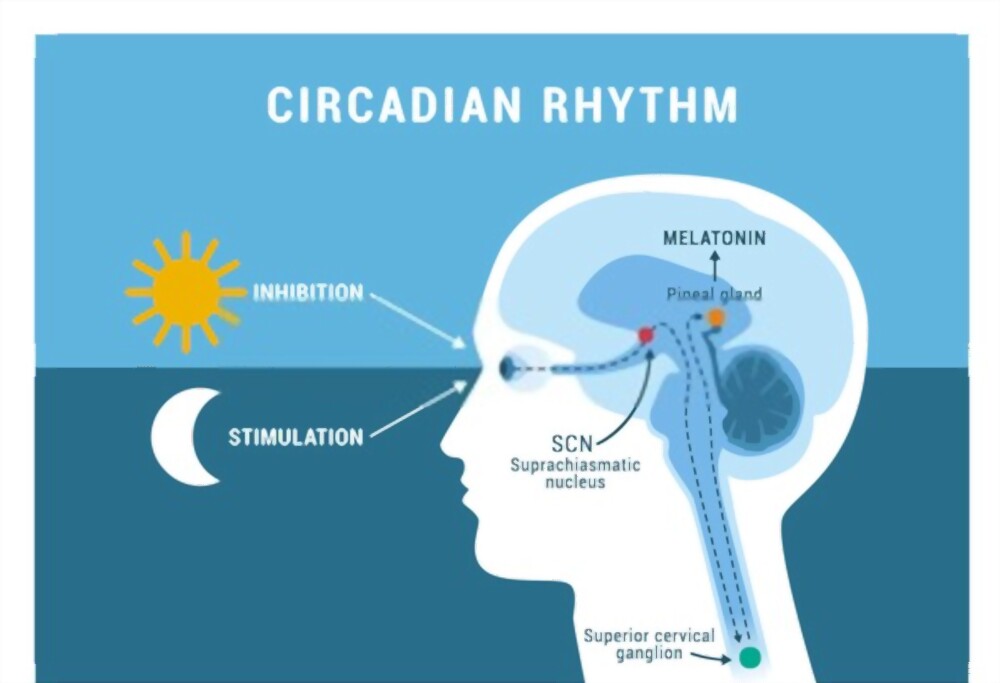 Circadian rhythms are physical, mental, and behavioral changes that follow a 24-hour cycle. These natural processes respond primarily to light and dark and affect most living things, including animals, plants, and microbes. Chronobiology is the study of circadian rhythms. One example of a light-related circadian rhythm is sleeping at night and being awake during the day.

A master clock in the brain coordinates all the biological clocks in a living thing, keeping the clocks in sync. In vertebrate animals, including humans, the master clock is a group of about 20,000 nerve cells (neurons) that form a structure called the suprachiasmatic nucleus (SCN). The SCN is in a part of the brain called the hypothalamus and receives direct input from the eyes.

Circadian rhythms can influence important functions in our bodies, such as:

However, most people notice the effect of circadian rhythms on their sleep patterns. The SCN controls the production of melatonin, a hormone that makes you sleepy. It receives information about incoming light from the optic nerves, which relay information from the eyes to the brain. When there is less light—for example, at night—the SCN tells the brain to make more melatonin so you get drowsy.

Changes in our body and environmental factors can cause our circadian rhythms and the natural light-dark cycle to be out of sync. For example:

These changes can cause sleep disorders, and may lead to other chronic health conditions, such as obesity, diabetes, depression, bipolar disorder, and seasonal affective disorder.

In the late 19th century Madame Blavatsky (who founded theosophy) identified the pineal gland with the Hindu concept of the third eye, or the Ajna chakra. This association is still popular today. This is the sixth primary chakra in the body according to Hindu tradition and signifies the subconscious mind, the direct link to Brahman. The third eye is said to connect people to their intuition, give them the ability to communicate with the world, or help them receive messages from the past and the future.

Melatonin is the best anti-ageing anti-oxidant product you can’t buy. Your body produces it in the pineal gland which is in your brain. Melatonin is produced when the light level drops. It also makes you sleepy but it also repairs your body cells and removes toxins in your body.

Make sure you get plenty of good quality sleep and at least one hour before sleeping start dimming the light down and avoid using your phone. Using a tablet or other type of screen before bed can delay the release of melatonin, making it harder to fall asleep right away. If you’re unable to turn off your device an hour or two before bed, as sleep experts recommend, using blue light glasses may help you sleep better. I’d avoid using any devices just before bedtime. Screens can emit a blue light which suppresses the production of melatonin. On your PC or laptop there is a night light setting which you can activate to display warmer colours. Keep your room as dark as possible and refrain from using a night light as visible light stops melatonin production and that will keep you awake. If you need to have a night light make sure it produces a warm (orange) light.

Aside from visible light, there are mixed opinions regarding the effect of Wi-Fi exposure on human health. While some studies show that Wi-Fi has adverse health effects, there are reports claiming that radiofrequency signals from wireless networks are too low to cause any damage to the human systems.

There are many scientific studies demonstrating the detrimental effects of Wi-Fi on the human body. It causes oxidative stress by increasing the production of free radicals.

Increased oxidative stress is responsible for oxidative damages to cellular macromolecules, such as proteins, lipids, and DNA.

Some studies regarding the effects of 2.45 GHz Wi-Fi signals on both human and animal health have demonstrated that the radiofrequency electromagnetic radiation emitted by WiFi devices can affect sperm count, motility, and DNA integrity.

Other changes in the male reproductive system include degenerative damages, lower testosterone levels, elevated cell death, and DNA damage, which are mainly caused by increased temperature and oxidative stress levels in the testes.

Regarding female reproductive changes, Wi-Fi exposure has been shown to reduce the production and secretion of estrogen and progesterone, leading to reduced reproductive efficacy and impaired fertility. Wi-Fi can also cause chromosomal mutations, which is one of the causes of spontaneous abortion.

Animal studies regarding the Wi-Fi effects on brain activity have revealed that exposure to both stress and Wi-Fi radiation causes the development of anxiety-like behavior; however, the spatial learning ability and memory remain unaffected.

The biochemical changes observed in the animal brain include increased oxidative stress in the cerebral cortex and increased activity of acetylcholinesterase.

Excessive Wi-Fi exposure is known to be associated with disrupted learning and memory, sleep deprivation, and fatigue related to reduced melatonin secretion and increased norepinephrine secretion at night. If you want to limit your exposure to Wi-Fi and your modem has a built-in clock you could programme it to turn itself off say at 10pm and come back on again at 7am. Otherwise you could just manually switch it off before bedtime.